[Physics] Highlights of the Year

Physics picks its favorite stories from 2018. 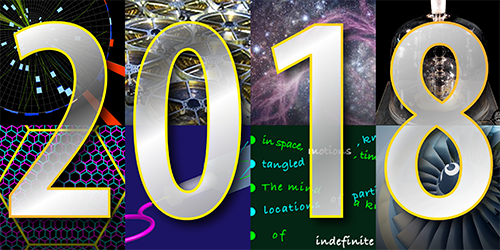 As 2018 draws to a close, we look back at our favorite stories of the year, from groundbreaking research to a poem inspired by quantum physics.

Best wishes for an exceptional 2019.

2018’s splashiest condensed-matter-physics result came from two sheets of graphene. Researchers in the USA and Japan reported finding superconductivity in stacked graphene bilayers in which one layer is twisted with respect to the other. The superconductivity they saw resembles that of high-temperature superconductors, potentially allowing use of twisted graphene as a model system for studying this behavior. The group took the APS March Meeting by storm when they announced the result in a standing-room-only talk, which was also live-streamed to hundreds more gathered around a screen in a foyer at the Los Angeles Convention Center (see Meetings: Scenes from the 2018 APS March Meeting). The experiments sparked a series of theoretical studies, each attempting to explain this unconventional behavior (see Viewpoint: Topological Superconductivity Could be a Twist Away). One prediction indicates that twisted graphene’s superconductivity might also be topological, a desirable property for quantum computation.

The Higgs Shows up with the Heaviest Quarks

After detecting the Higgs boson in 2012, the next order of business was testing whether it behaves as expected. Two such experiments at CERN, which measured the interactions of the heaviest quarks with the Higgs, attained the gold standard of “5 sigma” statistical significance. Analyzing proton-proton collisions, CMS and ATLAS determined the interaction strength between the top quark and the Higgs boson by measuring how often the Higgs boson is produced with a top quark and a top antiquark (see Viewpoint: Sizing up the Top Quark’s Interaction with the Higgs). The same collaborations later reported the first observation of the Higgs boson decaying into bottom quarks (see Viewpoint: Higgs Decay into Bottom Quarks Seen at Last). This decay is the most likely fate of the Higgs boson, but it was extremely difficult to see above the heavy background of bottom quarks generated in a typical experiment. So far, all measurements agree with the standard model of particle physics, but the uncertainties have enough wiggle room to allow for new physics.

Plenty of shakeups this year in the realm of dark matter. With a disappointing showing from the main dark matter contenders called WIMPs, other “less WIMPy” candidates have been vying for the top spot (see Meetings: WIMP Alternatives Come Out of the Shadows). One of these dark matter options, primordial black holes, garnered a lot of attention following the detections of black hole mergers by the LIGO-Virgo collaboration, but the excitement went down after a supernova lensing study found that black holes cannot account for all of the dark matter (see Viewpoint: Supernova Study Dampens Dark Matter Theory). However, the biggest splash of the year was an unexpected absorption signal from hydrogen gas at the time of the first stars. To explain these observations, theorists have proposed that the gas was cooled through interactions with dark matter (see Viewpoint: The First Stars May Shed Light on Dark Matter). One possibility is that dark matter particles carry a very small (one could say WIMPy) electric charge. 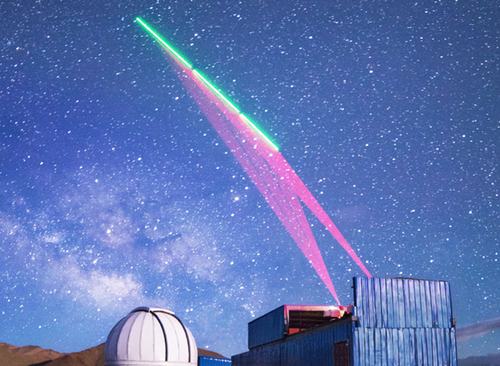 Researchers in China and Austria used a satellite link to hold the first intercontinental videoconference protected by quantum cryptography (see Focus: Intercontinental, Quantum-Encrypted Messaging and Video). The data security was provided by quantum key distribution (QKD), which exchanges cryptographic keys that are encoded in quantum-entangled photons. Long-distance QKD has been previously demonstrated on terrestrial networks of optical fibers, but optical losses in the fibers had limited the communication distance to a few hundred kilometers. Exploiting the undisturbed propagation of photons in space, the satellite experiment involved two stations that were 7600 km apart. Exchanging secret keys at kilohertz rates, the teams were able to send quantum encrypted images and to hold a secure videoconference that lasted 75 minutes and required 2 gigabytes of data. The demonstration is good news for those who envision a “quantum internet” built around a global network of ground stations and satellites.

Researchers with the MiniBooNE experiment at Fermilab in Illinois detected a signal that is incompatible with neutrino oscillations involving just the three known flavors of neutrinos (see Viewpoint: The Plot Thickens for a Fourth Neutrino). Confirming earlier results from the Liquid Scintillator Neutrino Detector (LSND) at Los Alamos—now with higher statistical significance—the finding suggests that muon neutrinos can transform into electron neutrinos over much shorter distances than expected. Both the MiniBooNE and the LSND results could be explained by a theory that includes a fourth, “sterile,” neutrino, which interacts only through gravity. The hypothesis of sterile neutrinos had seemed to have serious dents, as it’s inconsistent with other recent results with neutrinos produced at accelerators and nuclear reactors. The new MiniBooNE result, however, rekindles the debate about these particles, whose existence could potentially explain dark matter and the matter-antimatter asymmetry in the Universe.

Imagine a game of dreidel with a 60-billion-RPM top. Two independent teams set world records by spinning objects at such rates. The researchers, from the Swiss Federal Institute of Technology (ETH) in Zurich and Purdue University in Indiana used circularly polarized light, which has a rotating electric field, to twirl nanoscale objects (see Focus: The Fastest Spinners). The centrifugal force at these rotation rates was nearly enough for the silica spinners to break apart, so the technique could be used to stress-test nanomachine parts, say the teams. It could also be applied to study a hard-to-detect quantum form of rotational friction called the Casimir torque, a frictional effect caused by interactions of the object with the virtual particles of the quantum vacuum.

The units of measurement have historically been based on tangible things, like a human hand, a volume of water, or a chunk of metal. But these objects can change with time or place, which is why the world metrological community voted in November to adopt more universal definitions for the international system of units (SI) (see Kilogram Untethered from Earthly Objects). The four affected units—the kilogram, the ampere, the kelvin, and the mole—will now be defined in terms of fundamental physical constants, like Planck’s constant and the elementary electric charge. But bathroom scales, body thermometers, and other everyday measurement devices need not fear, as their jobs are secure. The only big loser is the international prototype kilogram—a platinum-iridium cylinder housed in Paris—which will no longer hold the title of mass standard for the world.

Electron microscopes have provided stunning images of atoms and molecules for decades. Still, this video of a nanowire growing one atomic layer at a time was the most popular of the ones we shared on social media—perhaps because it’s like watching the world’s tiniest 3D printer in action (see Focus: Video—Growing a Crystal One Atomic Layer at a Time). To understand how atoms position themselves when a crystal grows out of a liquid, researchers in France monitored the process with a transmission electron microscope. The liquid was a nanodroplet of gold that was supersaturated with gallium and arsenide atoms. The video shows atoms falling out from beneath the droplet to create a “step” at one corner of the liquid-solid interface. The step then sweeps across the surface as more atoms add up to build a new crystal layer.

Yarn is resistant to stretching, but knitted sweaters are very stretchable. Intrigued by this seeming contradiction, physicists at the École Normale Supérieure in Paris and Lyon investigated the stretching process for knitted fabrics (see Focus: Stitching Together a Knit Theory). The team applied controlled stretches to a fabric knitted with nylon thread and then came up with a few simple equations that account for the material properties they observed. Others had previously suggested that the stretchiness results from the yarn sliding from stitch to stitch and from the stitches becoming distorted. But the new equations, which can be adapted to any stitch pattern, explain the process quantitatively. The team hopes their results could be useful for engineers developing so-called smart fabrics, which, for example, could adopt specific shapes in response to heat.

Quantum Physics Gets a Poetic Makeover

Many find it hard to conjure the words needed to accurately describe the quirky world of quantum objects and its logic-defying rules. But researchers and artists alike keep trying to do exactly that. One such artist, poet Amy Catanzano, thinks that poetry could provide a tool for developing a more effective language for communicating the complex ideas of quantum physics. This year she put her idea into practice through a poem about a topological quantum computer consisting of four quantum bits (see Arts & Culture: Poetry Takes on Quantum Physics). The poem attempts to translate the quantum theory behind this computer through its word choices and its structure. Whether physicists will adopt poetry as a language for quantum physics remains debatable. Either way, this poem provides a pathway for those outside of physics to acquaint themselves with some tricky quantum concepts.