It`s the first year to Hefei Friendship Award for "foreign experts who have made outstanding contributions to Hefei's economic and social progress". Ten foreign experts won this prestigious award and the best winner, Prof.Matthias Weidemüller was nominated on the recommendation of University of Science and Technology(USTC). To give the honor to Prof. Matthias Weidemüller, on April 19th morning, the award ceremony was held in in USTC, co-organized by USTC and the Hefei administration. 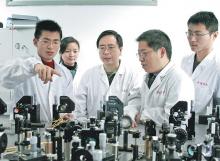 Scientist fulfills dream of making physics matter
Let us suppose you carried a safety deposit box all the way from Swiss Valartis Bank to Beijing, only to leave the key in Liechtenstein. What would you do?
This isn't a problem. "Just replicate an identical key in Beijing," says Pan Jianwei, a renowned quantum physicist in China.