"It's a huge, major achievement," says Thomas Jennewein, a physicist at the University of Waterloo in Canada. "They started with this bold idea and managed to do it."

Entanglement involves putting objects in the peculiar limbo of quantum superposition, in which an object's quantum properties occupy multiple states at once: like Schrödinger's cat, dead and alive at the same time. Then those quantum states are shared among multiple objects. Physicists have entangled particles such as electrons and photons, as well as larger objects such as superconducting electric circuits.

Theoretically, even if entangled objects are separated, their precarious quantum states should remain linked until one of them is measured or disturbed. That measurement instantly determines the state of the other object, no matter how far away. The idea is so counterintuitive that Albert Einstein mocked it as "spooky action at a distance."

Starting in the 1970s, however, physicists began testing the effect over increasing distances. In 2015, the most sophisticated of these tests, which involved measuring entangled electrons 1.3 kilometers apart, showed once again that spooky action is real.

Beyond the fundamental result, such experiments also point to the possibility of hack-proof communications. Long strings of entangled photons, shared between distant locations, can be "quantum keys" that secure communications. Anyone trying to eavesdrop on a quantum-encrypted message would disrupt the shared key, alerting everyone to a compromised channel.

But entangled photons degrade rapidly as they pass through the air or optical fibers. So far, the farthest anyone has sent a quantum key is a few hundred kilometers. "Quantum repeaters" that rebroadcast quantum information could extend a network's reach, but they aren't yet mature. Many physicists have dreamed instead of using satellites to send quantum information through the near-vacuum of space. "Once you have satellites distributing your quantum signals throughout the globe, you've done it," says Verónica Fernández Mármol, a physicist at the Spanish National Research Council in Madrid. "You've leapfrogged all the problems you have with losses in fibers." 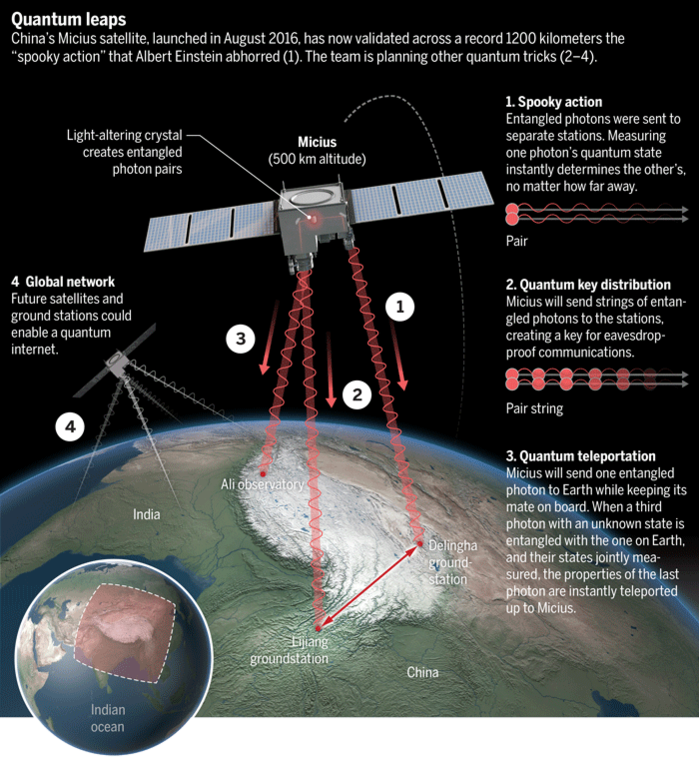 Jian-Wei Pan, a physicist at the University of Science and Technology of China in Shanghai, got the chance to test the idea when the Micius satellite, named after an ancient Chinese philosopher, was launched in August 2016. The satellite is the foundation of the $100 million Quantum Experiments at Space Scale program, one of several missions that China hopes will make it a space science power on par with the United States and Europe.

In their first experiment, the team sent a laser beam into a light-altering crystal on the satellite. The crystal emitted pairs of photons entangled so that their polarization states would be opposite when one was measured. The pairs were split, with photons sent to separate receiving stations in Delingha and Lijiang, 1200 kilometers apart. Both stations are in the mountains of Tibet, reducing the amount of air the fragile photons had to traverse. This week in Science, the team reports simultaneously measuring more than 1000 photon pairs. They found the photons had opposite polarizations far more often than would be expected by chance, thus confirming spooky action over a record distance (though the 2015 test over a shorter distance was more stringent).

The team had to overcome many hurdles, including keeping the beams of photons focused on the ground stations as the satellite hurtled through space at nearly 8 kilometers per second. "Showing and demonstrating it is quite a challenging task," says Alexander Ling, a physicist at the National University of Singapore. "It's very encouraging." However, Ling notes that Pan's team recovered only about one photon out of every 6 million sent from the satellite—far better than ground-based experiments but still far too few for practical quantum communication.

Pan expects China's National Space Science Center to launch additional satellites with stronger and cleaner beams that could be detected even when the sun is shining. (Micius operates only at night.) "In the next 5 years we plan to launch some really practical quantum satellites," he says. In the meantime, he plans to use Micius to distribute quantum keys to Chinese ground stations, which will require longer strings of photons and additional steps. Then he wants to demonstrate intercontinental quantum key distribution between stations in China and Austria, which will require holding one half of an entangled photon pair on board until the Austrian ground station appears within view of the satellite. He also plans to teleport a quantum state—a technique for transferring quantum-encoded information without moving an actual object—from a third Tibetan observatory to the satellite.

Other countries are inching toward quantum space experiments of their own. Ling is teaming up with physicists in Australia to send quantum information between two satellites, and the Canadian Space Agency recently announced funding for a small quantum satellite. European and U.S. teams are also proposing putting quantum instruments on the International Space Station. One goal is to test whether entanglement is affected by a changing gravitational field, by comparing a photon that stays in the weaker gravitational environment of orbit with an entangled partner sent to Earth, says Anton Zeilinger, a physicist at the Austrian Academy of Sciences in Vienna. "There are not many experiments which test links between gravity and quantum physics."

The implications go beyond record-setting demonstrations: A network of satellites could someday connect the quantum computers being designed in labs worldwide. Pan's paper "shows that China is making the right decisions," says Zeilinger, who has pushed the European Space Agency to launch its own quantum satellite. "I'm personally convinced that the internet of the future will be based on these quantum principles."