BEIJING - As the first to achieve quantum key distribution from a satellite to the ground, China is confident in making more scientific and technological breakthroughs.

The achievement, based on experiments conducted with the world's first quantum satellite -- Quantum Experiments at Space Scale (QUESS), lays a foundation for building a hack-proof global quantum communication network.

QUESS, nicknamed "Micius" after a fifth century B.C. Chinese philosopher and scientist, was launched on Aug. 16, 2016.

China has become the first country to send quantum keys－highly complex encryptions－from a satellite to a base on Earth, and to teleport light particles the other way.

The accomplishments are two major breakthroughs in the effort to create an unhackable global communications network.

The two experiments mark the completion of the the second and third of the three main goals of Micius, the world's first quantum communications satellite, which China launched last year. 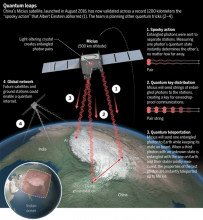 LU Chaoyang was awarded the 2017 Fresnel prize for fundamental aspects for his outstanding achievement in quantum light sources, quantum teleportation and optical quantum computing, announced by the European Physical Society. The Plenary Ceremony will take place on June 27th in Munich, Germany.

The prize is named after Augustin-Jean Fresnel, a leading physicist in the 19th century. It is regarded as the highest global honor for scientists under the age of 35 in the field of quantum electronics and optics.

BEIJING, May 23 (Xinhua) -- On a table of 3 square meters are dozens of lenses and odd devices, with wires suspended above and a machine chirping ceaselessly.

It is a prototype quantum computer developed by about 20 Chinese scientists at the Shanghai-based Institute for Quantum Information and Quantum Technology Innovation of the Chinese Academy of Sciences (CAS).

The "baby" quantum computer, unveiled in early May, is the first quantum computing machine based on single photons that could go beyond the early classical -- or conventional -- computer.

On January 18th, 2017, Mozi, the world's first quantum communication satellite, has been handed over to scientists for the official start of scientific experiments after its 4-month in-orbit test came to a successful end. The ceremony was held in Beijing and the satellite will soon been put into service for testing the phenomena of quantum entanglement and 'unhackable' quantum communication.

PAN Jianwei, Academician of the Chinese Academy of Sciences, became one of the role models as the leader of quantum communication. He contributes a lot to success of Mozi, the world’s first quantum satellite, as the chief scientist of the project.

*For the first time, the unpredictability of human will be the key to quantum physical experiments.
*The experiments will test Albert Einstein’s idea of ‘local realism’, a phenomenon at the very core of the mysteries of the quantum world.
*The success of the experiments needs the contribution of at least 30,000 people, we invite everyone all over the world to join the test on November 30th.

Physicist from the USTC drives mission to make country a world leader in communications technology. China took a huge step toward building a space-based quantum communication network that would be virtually uncrackable when it launched Micius, the world's first quantum experiment satellite, on Aug 16.
The 640-kilogram satellite will serve multiple scientific purposes, including the testing of the technology that distributes quantum keys, which can be used to encrypt or decrypt data, between ground and space. In the following three months, the satellite will undergo a series of tests before scientific experiments are conducted in the coming two years.

At 1.40am this morning, China launched a new Space Race with the world's first quantum satellite, recently named Micius after an ancient Chinese philosopher and engineer, who, more than 2,400 years ago, proposed that light always travelled in a straight line and that the physical world was made up by particles. Quantum teleportation technology would be able to eliminate the 20-minute time delay in communication between earth and Mars and would allow tiny spacecraft to send back images and videos of planets many light years away without the need to carry a huge antenna.